The Vapour Blasting process uses a specialised enclosed cabinet with a powerful pump that mixes water and blast media into a slurry, then through a nozzle, combines with very high air volume to vapourise as it contacts the target metals surface.

In slow motion, the blast media is cushioned by water as it contacts the metal.  It then flows across the surface at high velocity creating its unique peening and cosmetic effect.  Typically, Vapour Blasting will result in metal surfaces being restored to ‘as new’.

This cushioning effect means that metal parts are cleaned without damage or erosion of the surface. For engines in particular, this means that parts machined to close tolerances will not be affected by the Vapour Blasting process (think safe carbon removal from pistons / valves / heads / bearing recesses).

In most all instances, this process is far superior to dry blasting (sand / garnet / bead etc), where typically, aggressive media hits the surface of the metal at an oblique angle, removing the surface impurity as well as a percentage of the base metal.  Elegance versus brute force!

Do you have a metal polishing, refinishing or restoration project that you’d like us to take care of? Get in touch with Steve at Tauranga Vapour Blasting today. 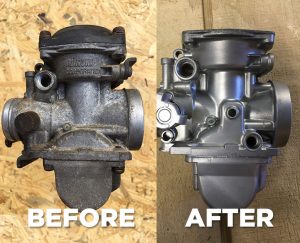 All vapour blasting takes place in an enclosed cabinet.  Blast media is water-borne.

Produces a medium-high satin lustre finish. The perfect cosmetic finish as is but also the best base-stage prep for a high-polish show finish.

No media impregnation in the metal. No metal erosion, safe for dimension-critical components.

Micro-peening properties of the process closes the pores of the metal, leaving metal impervious to grease, oils, fingerprints etc.

A History of Vapour Blasting

Blasting with silica media is not new. In the U.S.A.  pre 1950’s, silica was often used for DRY-blasting as it was known to be very effective. However, the discovery that the resulting silica dust particles could cause fatal Silicosis when inhaled subsequently saw its use banned in many countries.

During this same period, on the other side of the Atlantic, Rolls Royce had discovered  the positive attributes of  wet-blasting with silica.  As opposed to blasting for cosmetic purposes, Rolls Royce employed wet blasting as a method of  honing and peening  metal surfaces of parts that made up there legendary jet engines.

Obviously, wet-blasting had to be carried out in a specially designed cabinet.  In these early years, stainless steel was rare and very expensive.  Because of corrosion, the mild steel cabinets that were initially fabricated and used would only last 4-5 years before having to be scrapped and replaced.

So it is really only in the last decade or so, with the now economic supply and ubiquity of stainless steel that Vapour Blasting machines can now be manufactured on a smaller, non-corporate scale, providing much wider accessibility to this proven, safe and environmentally friendly process.